A car’s battery can die anytime and is a common issue, and as a driver, you can be sure that you must do it at least once in your driving lifetime. If you need to jump-start your car, you need to have some equipment and the proper technique not to damage your battery or the other car battery, depending on whether your car is a manual transmission or automatic. 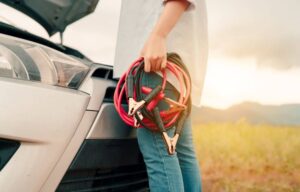 In this article, learn the correct way to jump-start your car, what are the equipments required, and how to use it.

Equipment Needed to Jumpstart Your Car

To get your car battery working again, you will need:

How to Restart Your Car Battery Using Jumper Cables

When you realize your car battery is dead, get your jumper cables and the jump box or if you are using another vehicle, let it drive towards your car facing the hood of your car. The jump cables should reach the two-car batteries comfortably.

Ensure that the jump box has enough battery power to restart your vehicle battery and the voltage system type is like the car. A 6V jump box cannot restart a 12V car battery as it does not have enough power.

If you are using two vehicles:

If you are using jumper cables with a jumper box, you will need to follow the steps below to jump-start your car correctly without damaging your car battery or the other car battery. 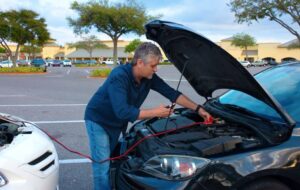 To attach the cables to the two cars, the following is the order:

To Jump-start the Car

When using a jump box, you will put the jump box power switch on and then follow the process above. Once the car has started, put the power switch off and then detach the clips in the order above. 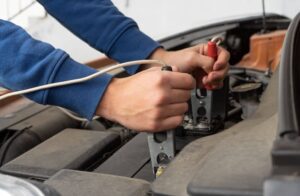 Push starting a car with a dead battery involves using force. You may need to use this method if you do not have a jump box or another car. In this method, you will need more than one person to begin.

These are the steps that you will take: 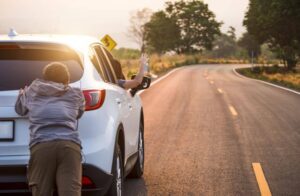